The Okinawa Prefectural Museum will work to broaden, deepen and expand the scale, purposes, identity and work of the old Shuri Museum to build a true 21st century museum.

The Okinawa Prefectural Museum was established to create a focal point for the systematic study, collection and preservation of materials and resources related to Okinawa’s nature, history and culture, and to exhibit the results to people in the prefecture, in the nation and in the world, thus deepening understanding and raising the level of culture in this prefecture. 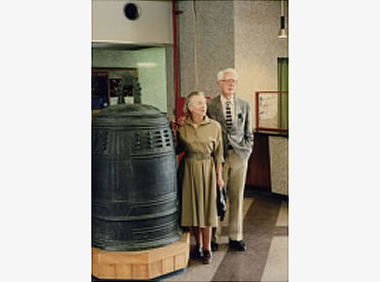 In 1945, two officers in the American Navy’s military government, Navy Captain Willard A. Hannah (1911-1993) and Lt. Cdr. James T. Watkins (dates unknown), opened a museum in a private house in Ishikawa (now Uruma City) Higashionna to help acquaint American military and civilian personnel with Okinawa’s history and culture. This facility, with its display of Buddhist images, pottery and lacquer ware, was called The Okinawa Exhibition Hall, and was the seed of everything that came after.
Captain Hannah played a particularly important role in reviving education and culture in immediate postwar Okinawa. Hannah was instrumental in getting the Enkakuji bell returned from the Philippines. He ordered preparation of a textbook of Okinawan history. He formed a theatrical company and gave both moral and tangible support to Okinawan artists. Hannah returned to Okinawa twice after the war, in 1955 and again in 1990.
The Exhibition Hall with its red tile roof was but a simple private house. However, the yard was refurbished and a temple bell was hung to give the place the air of an Okinawa museum. When it was later transferred to the control of the civil administration, its name was changed to the Higashionna Village Museum. 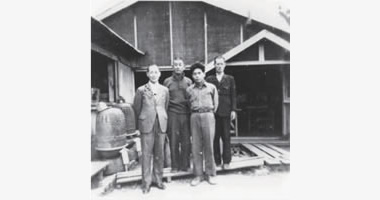 (Shuri Folk Museum-to-Shuri Museum)
Beginning in October 1945, people could return to the Naha-Shuri area, so they began to move out of the relocation camps and go back to their towns and villages. In March of 1946, the Shuri City Culture Department was set up. It rented a sort of shed with a galvanized iron roof and open on the sides, asembled a collection of cultural items and artifacts and opened the Shuri Folk Museum. Management was quickly transferred to the city and the name changed to The Shuri City Folk Museum; however the financial burden was too much so by November, the Okinawa Civil Administration had taken over, bringing another name change, to The Shuri Museum.
This brave undertaking was primitive in the extreme. The museum floor space was but 26 tsubo (85.8 ㎡); the office had 5 (16.5 ㎡), all under a corrugated roof and surrounded by tent camps and wire netting. There was no lock on the door so people had to whack a nail to shut it. The risk of theft and loss from typhoons, etc., was so great that a new building was soon put up at Ryutan Pond, and at the same time, the Shuri museum merged with the Higashionna museum

Cmmemorative Photo of Shouji Hamada with Tsuboya Potters in front of the Government of the Ryukyu Islands Museum.

Front of the Perry Commemorative Hall

(Shuri Museum-to-Government of the Ryukyu Islands Museum)
Work on the new museum building started in February 1952. Built in the shape of a ko (a square open on one side) katakana character, it had brick walls and a red tile roof, but the supply of building materials at the time was so tight that museum planners and staff had to scramble around making their own bricks. With both materials and money in short supply, completion of the museum building was greatly delayed. However, the prospect of an annex commemorating Commodore Perry’s 1853-54 visits to Okinawa got the American Civil Administration involved and with its support, the museum was finished in May 1953. On May 26, the Perry Commemorative Hall-Shuri Museum completion ceremony was held and the museum took custody of the Omorosoushi, the priceless Ryukyu Kingdom compilation of song and history.
The move to a new museum did not mean the end of efforts to assemble a collection. In August 1954, the Edo Yona sanshin (Okinawan lute) was obtained. This had originally gone to the Okinawa folk museum collection in Shurijo Castle, but was turned over on the recommendation of Mr. Kanjun Higashionna.
In 1955, the museum became The Government of the Ryukyu Islands Museum. In April 1964, Okinawa hosted the All-Japan Folk Arts Association Festival. The whole museum was thrown open for a special folk arts exhibition and some 400 association members came from mainland Japan.

The Gobernment of the Ryukyu Islands Museum (Statue by Jahana Unseki)

(Government of the Ryukyu Islands Museum -to- Okinawa Prefectural museum)
In April 1962, the American civil administration directed that a museum construction plan be drawn up. In October of the following year, a subcommittee was set up and a design contest held. The Ganaha Design Office won with a design modeled on Shurijo Castle. However, specialists from the American civil government weighed in with the opinion that the Shurijo Castle-inspired design had too much “local color” and that a more modern design would be better, and so the design was revised.
The Kokuba Gumi construction company won the job with a bid of $356,000 in May 1965. The American civil government contributed $317,000 and the rest came from The Government of the Ryukyu Islands. Work began on the 12th of June, the building was declared finished on October 6 and its formal opening occurred on Culture Day, November 3. A month-long inaugural exhibition featuring the works of contemporary Okinawan artists under the heading, New Museum Opening Commemorative Contemporary Art Exhibition, ran from November 3 to December 2. Eight priceless Sho family heirlooms, contributed through the kindness of Mr. Hiroshi Sho, were shown concurrently in a special exhibition. Okinawa’s reversion to Japan in 1972, brought a museum name change: to The Okinawa Prefectural Museum and the very next year, monies from the national treasury paid for a second floor addition and this in turn made space available for a folk customs room, a pottery exhibition room (later this became a storeroom) and an arts and crafts room. Soon a high-built storage house, disassembled and brought in its entirety from Okierabu Island, appeared in the front courtyard followed by the Enkakuji tower bell. Then for 40 years until 2006, the museum was the setting for a wide array of activities-special exhibitions, planned exhibitions, research work and much more.

The New Museum at Omoro-machi

Construction of the New Museum at April 2006

During its 40-year history, the old museum increased its collection to 80,000 items, severely straining, as might be expected, its available storage capacity. Exhibition rooms and even the second floor seats in the auditorium were used as storage space. Still cramped, the museum put up prefabs on the grounds, but the collection just kept right on swelling and continued to be an urgent ongoing problem. The situation reached the point where in order to stage a special exhibition the history exhibition room had to be cleared out to make a place for it.
Museum staff began broaching the idea of a new museum during the 1960s. At one point the idea of converting the auditorium into exhibition and storage space came up, but even this rather farfetched idea would have come up woefully short of solving the space problem. As a matter of fact, more than one-third of the auditorium’s first floor seats had already been co-opted for storage, leaving just the other two-thirds for lectures and the like. Finally, in 1991 the basic conception of a new museum was established, exhibition and construction committees were formed two years later, design proposals were solicited, and an exterior design suggesting the image of Gusuku was adopted. However, from around 1995, the prefecture’s finances declined and construction had to be put on hold for a time.
In 2003, work on the new museum resumed as a project marking the 30th anniversary of reversion. The Exhibition Supervisory Committee opened discussions with the departments concerned to work out design principles for the exhibitions

A key mission of this museum is to continue to meet the needs of the future by promoting and deepening understanding of Okinawa’s distinctive nature, history and culture through research, exhibition and diffusion activities. Through research, collection, preservation and exhibition activities related to resources of Asia and the Pacific with their deep ties to Okinawa we will promote cultural interchange in this age of internationalization.

In addition to scientific work on its own exhibitions and collections, we at the museum undertake broader Okinawa-related research projects. Research on a particular theme or topic focusing on a given geographical area may involve the entire research staff. In addition of course, individual staff scientists and scholars do research in their own special fields
The all-inclusive projects go into various surrounding islands and areas and look for primary resources across the whole range of fields-nature, history, folk customs, antiquities, arts and crafts-with which the museum is concerned. Starting with Agunijima Island in 1979, research on Yonagunijima Island has been ongoing since 2004.
Individual research takes several forms. Museum curatorial staff pursue research projects of their own devising in their specialties, and also respond to requests from people and agencies outside the museum. And of course, museum curatorial staff collaborate with universities and other researchers.
Through research and scholarship of these kinds, the Okinawa Prefectural Museum aims to deepen understanding of Okinawa’s unique nature and special traditions, raising awareness in and outside of the prefecture of Okinawa’s “special-ness” and enhancing, so to speak, its image.

Our museum collection includes an immense variety of “objects”-objects of different kinds and character, objects from different places, objects with different uses, made or originating at different times, objects with different weights and measures. To be sure of passing it on to the future in good order as it were, this rich bounty of museum resources must be preserved and managed with the best available techniques. Also, keeping an eye on the long term, we also have to keep up with the latest developments in museum management so as to be sure that our management, use and restoration practices are always on the cutting edge.
Specifically, we must be sure to keep temperatures and humidity at optimal levels; we have to guard against insect and pest infestations; we must continually work to prevent deterioration and damage to our holdings, and to restore those that are already damaged. And last but far from least, we have to keep detailed systematic preservation and collection records. The computer is an immense help in this vital task and we are working to fully digitize our collection database.

Our museum’s mission is to continue to gather in artifacts and specimens relating to Okinawa across the broad spectrum of its nature, history and culture. Historical documents and other resources directly or indirectly relating to Okinawa are, needless to say, found here, but are also spread around various places in Japan and the world. This far flung distribution vividly testifies to ocean-bound Okinawa’s long history of relations across the sea with Japan and other countries.

Exhibitions involve putting together items from the museum’s collection under some theme or topic, for public display. Planning and putting together an exhibition require careful thought about the backgrounds and meaning of the items that might be included. Each potential selection has to be analyzed by museum curatorial staff in detail from every relevant perspective, the object itself and its relations to other objects, all with the goal of designing an exhibition that is as interesting and as easy to understand as possible.
The permanent exhibitions are the museum’s mainstays. These offer an introduction to Okinawa’s nature, history and culture. The museum also offers a rich menu of special and program exhibitions (Entrance fees differ for these.) designed around specific themes. Also, with its traveling museum and other special exhibitions held around the islands, the museum “jumps its walls” to take its treasures out to the people. This is one of the things that make the museum special, in our far-flung island prefecture, Okinawa.